The oil market is getting used to a new reality, "short-term price spikes amid rising geopolitical tensions". The US-Iran conflict in January which is sending prices to an area of 8-month highs had much in common with the September events. Then, after attacks on industrial facilities in Saudi Arabia, the market started talking about supply disruptions, however, as soon as it turned out that the industry suffered minor damage, Brent together with WTI moved down. According to DNB Bank, in order for the North Sea variety to gain a foothold above $70 per barrel, investors need confidence in the supply of black gold.

After the assassination of an Iranian general and an attack on US military bases in Iraq, the Middle East conflict was exhausted. Tehran did not block the Strait of Hormuz, Donald Trump did not start the war. As a result, the euphoria of speculators, which grew by the end of the first week of January to Brent net longs to their highest levels since October 2018, turned out to be excessive. It quickly gave way to panic and the closure of long positions. As a result, the North Sea variety was the worst five-day in six months.

The avalanche-like closing of the longs is not the only reason for the sharp fall in prices for black gold. US oil companies are actively using Brent and WTI ups to hedge risks. They fix the high cost of oil, and then quietly increase production. This tactic has allowed the States to become the largest mining country in the world and for the first time in many years to receive the status of a net exporter.

The dynamics of the American foreign trade in oil: 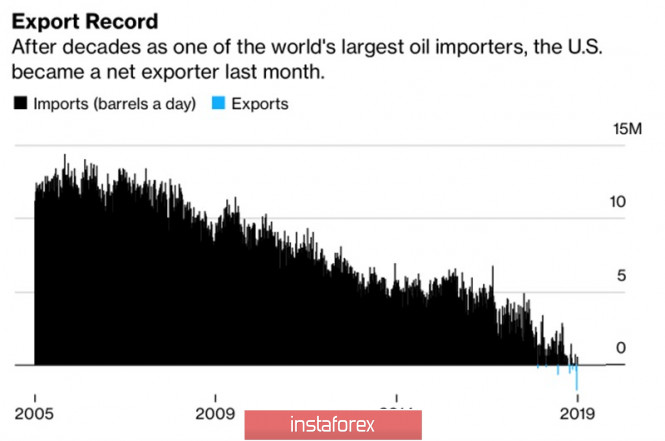 After going into the shadow of the geopolitical factor, the bulls on black gold can only count on the continued strong demand from China and on the OPEC + agreement to reduce production. Nevertheless, the second factor is already largely taken into account in futures quotes, and the Celestial Empire in 2020 can significantly reduce oil imports. In 2019, it increased by 9.5% yearly and reached a level of 506 million tons, which is equivalent to 10.12 million bps. In December, China imported 10.78 million bps, which is the second record high after the November 11.3 million bps. The reason should be sought in the construction of new refineries, however, according to China National Petroleum, in the new year, demand may decrease by almost half. Pressure will come from trade wars and a weak domestic car market.

In my opinion, the fact that American producers managed to fix high oil prices as a result of hedging and now be able to increase production without any fear is a bad sign for the black gold market. It is not known whether the economies of the Middle Kingdom and the eurozone can begin to recover even after the signing of the trade agreement by Washington and Beijing, because tariffs on $370 billion of Chinese imports remain in force.

Technically, after reaching the targets for the "Wolfe Waves" and Gartley patterns, a logical rollback followed. If the Brent bulls fail to control the support at $63.8 per barrel, the correction risks gaining momentum.

Risk Warning: CFDs are complex instruments and come with a high risk of losing money rapidly due to leverage. 55.29% of retail investor accounts lose money when trading CFDs with this provider. You should consider whether you understand how CFDs work and whether you can afford to take the high risk of losing your money.
You are now leaving www.instaforex.eu, a website operated by INSTANT TRADING EU LTD
Proceed
Online
support
Online Forex news
Exclusive newsline by InstaForex is your reliable assistant in the Forex world.
Learn More

InstaForex - always on your mobile device!

The future is coming - InstaForex and Dragon Racing
The team of Formula - E
Team up with us -
win with InstaForex and Zvolen!
IIHF Continental Cup winner in 2005