Harami is a reversal pattern formed by two candlesticks: a small candle and relatively large  previous candle. This pattern can be seen anywhere on a chart, in weekly, daily, hourly and even minute time frames.

"Harami" is an old Japanese word for "pregnant". Bodies, which Harami consists of, are of the opposite colors just like in the Engulfing pattern.

The Harami pattern formed either after a downtrend or at a peak after a long uptrend points to a trend weakness and reversal. The color of a small candle does not matter.

When making decisions in the market, a trader should take into account the position of the small candle in regard to the long real body of the preceding candlestick as the position has a considerable impact on the significance of the pattern.

There is Bearish Harami and Bullish Harami

In case of the Bullish Harami pattern, which is formed during a downtrend, the body of a small candle is completely engulfed by the body of a large candle. It means the current trend may change into an uptrend and it will be sensible to go short.

The Bearish Harami formation during an uptrend points to a change to a downtrend, thus providing the opportunity to go long. 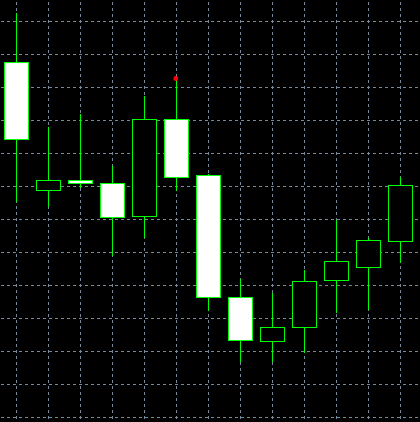