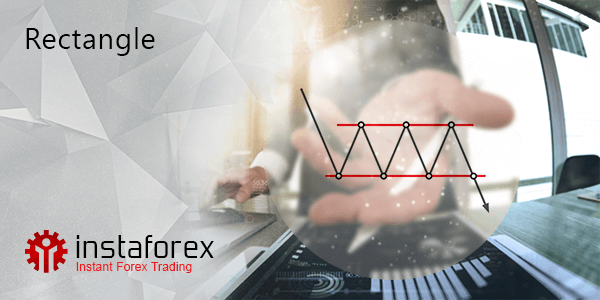 Rectangle - one of the most famous and simple methods of technical analysis in trade. Although it is easy to determine on the charts, this is an important and very strong figure, which is an indicator of the continuation of the trend. Due to the correct recognition of the rectangle, the trader can successfully enter the market.

The Rectangle is one of the most popular and easy patterns that is used in the technical analysis. Though being a rather simple pattern, it is a quite important and strong figure that is a very obvious sign of a trend continuation. After noticing it, a trader gets an opportunity to place a potentially profitable order.

In other words, the Rectangle signals a sort of a pause in a trend, indicating price consolidation before a jump towards the unfolding trend. This pattern is formed when the market is trading sideways. 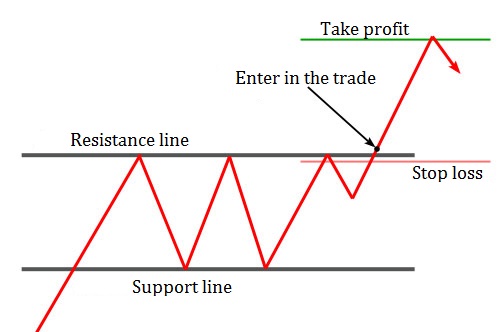 The pattern looks similar to another figure of the technical analysis – the Flag. However, the Rectangle has horizontal support and resistance lines, and there is no flagpole in it. Prices move inside the pattern between two parallel lines. Two vertical lines can be drawn in order to complete the figure, but it is not necessary as they do not play any significant role.

It is important to pay attention to the fundamental components. Formation of the Rectangle often precedes publication of some important news the result of which is hard to be predicted. If the published data coincides with forecasts, then prices usually move with the previous bias.

It often happens that prices break in the direction of the previous trend. That is why the Rectangle is defined as a continuation pattern. However, sometimes prices break the pattern and move in the opposite direction. In that case the Rectangle becomes a reversal pattern. It may happen after macroeconomic statistics do not match forecasts.

It is quite easy to distinguish the Rectangle on a chart. It looks as a small trading channel or a sideways trend. The figure indicates that bears and bulls reached parity. Until a support or resistance line is broken, the Rectangle signals continuation of a trend.