The Bollinger Bands indicator is a technical analysis instrument reflecting current fluctuations of an asset price (e.g. a share, commodity or currency).

The Bollinger Bands are calculated based on a standard deviation of a moving average. It is usually depicted on the price dynamics chart.

The key features of this indicator are:

2. If prices go beyond band boundaries, the current trend is expected to continue.

4. A price movement started from one of the band boundaries usually reaches the opposite boundary.

The latest observation is useful for forecasting price targets. 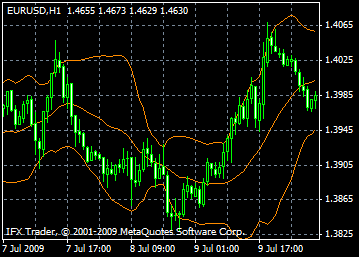 The Bollinger Bands are made up of three lines. The middle line (MIDDLE LINE, ML)  is a simple moving average.

The upper line (TOP LINE, TL) is the middle line moved upwards by a certain number of standard deviations (D).

The lower line (BOTTOM LINE, BL) is the middle line moved downwards by the same number of standard deviations.

N – the number of periods used for calculation

It is recommended to use 20-period simple moving average as the middle line and two standard deviations to determine band boundaries. Besides, moving averages of less than 10 periods are not very efficient.