Being above zero mark, histogram gives the only signal for buying.

When histogram starts changing its direction from the lowest point to the highest one, when bar which is lower than the first one and red-colored, then "Saucer" signal appears.

For "Saucer" signal appearance it is necessary at least 3 bars of histogram.

Please note that using the "Saucer" signal for buying, Awesome Oscillator bars should be above zero line.

When the histogram passes from negative rates to the positive ones, signal for buying appears.

only two bars are necessary for the signal;

one of the bars should be under zero level and the second one should cross it (pass from negative rate to the positive one).

There can be signal for buying and selling at the same time.

Being under the zero line the rate of histogram only in this case gives a signal for buying.

if the pike is downward (the lowest minimum), placed under the zero line and followed by another downward pike, which higher than the previous one (negative number which is less by absolute value, so it is close to zero line), it makes a signal.

New pikes of histogram must be different by height, i.e. every new pike must be higher than previous one. 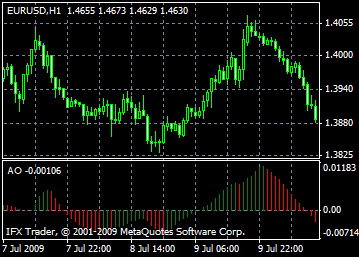