The Moving Average Convergence/Divergence Technical Indicator is constructed on the difference between moving averages with 26-period and 12-period. For indicating the most advantageous moments the signal line (9-period indicators` moving average) is inserted on the MACD.

The MACD is better to use in wide-swinging trading market. e Moving Average Convergence/Divergence usually gives signals if crossing or divergence take place and in the overbought/oversold condition.

Average Convergence/Divergence is also useful for overbought/oversold condition indication. When the MACD rises, it means that the price is overvalued and will soon return to the more realistic levels.

An indication that the current trend is expected to be completed occurs when the MACD diverges from the price. A bullish divergence takes place when the price reaches new maximums and at the same time the Moving Average Convergence/Divergence indicator fails to reach new highs. A bearish convergence is formed when the price makes a new low and the MACD fails to do it. Both types of divergence are very important if they occur in the overbought/oversold area. 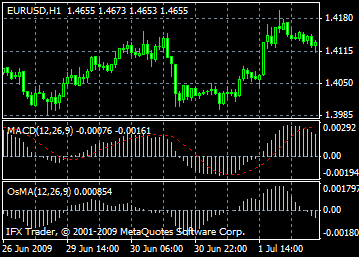 SIGNAL - the signal line of the indicator.